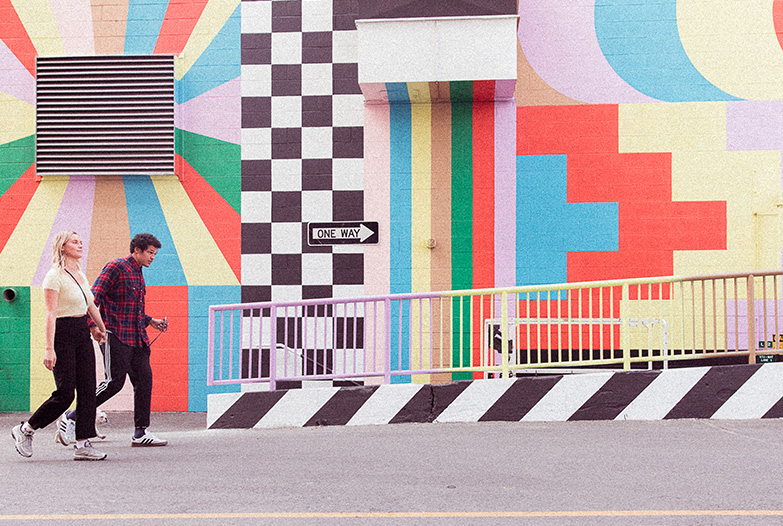 Murals have long been an iconic part of Los Angeles, telling not only the story of the artist, but revealing the ever-changing streetscape of the city. Through a collaborative process, artists have paid homage to our district’s rich history, while adding their own unique message that embodies the vibrant, community spirit of today.

If you haven’t already seen the artists’ work at ROW, you’ve likely spotted their signature motifs online. In an effort to take you a step further behind the scenes and inside the artists’ minds, we explored their sources of inspiration. 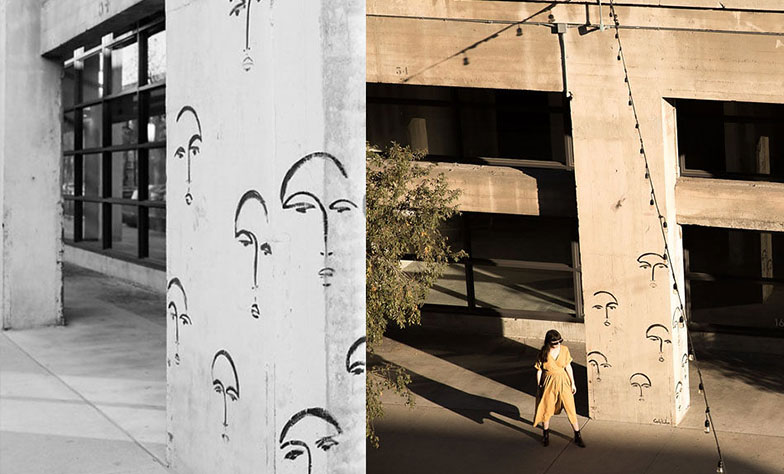 Native New Yorker and long-time Angeleno Carly Kuhn, aka the Cartoralist, began her foray into art with simple line drawings and witty fashion illustrations. When something catches her eye, whether it’s an alluring expression or a beautiful hotel, she has an almost reflexive need to translate what she sees into a drawing or painting. “The minimalistic nature of my work was not intentional,” she says, “but a response to the noise and chaos of the world around us. I like using fine lines and a lot of white space, as a way for the viewer to breath.”

Her ongoing study of faces, and the imperfections that make them interesting and beautiful to her, has led them to become a recognizable motif –she’s even dubbing her love of adorning the faces onto an object or wall as ‘Cartorializing.’

Her signature ‘Faces’ series can be found peeking out from the walls on Market Row. 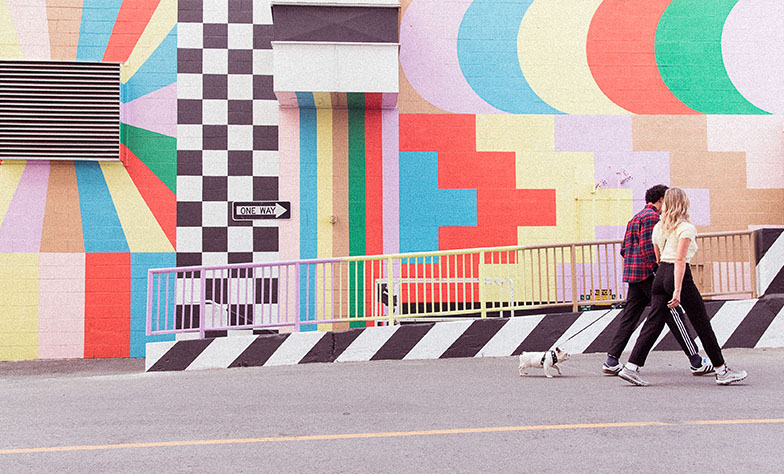 London-based artist Lakwena Maciver recalls being interested in words from a young age. As the daughter of two politically active parents, Lakwena recounts helping her mom make signs and posters for her protest marches, a creative act that attuned her to the power of text, early on. 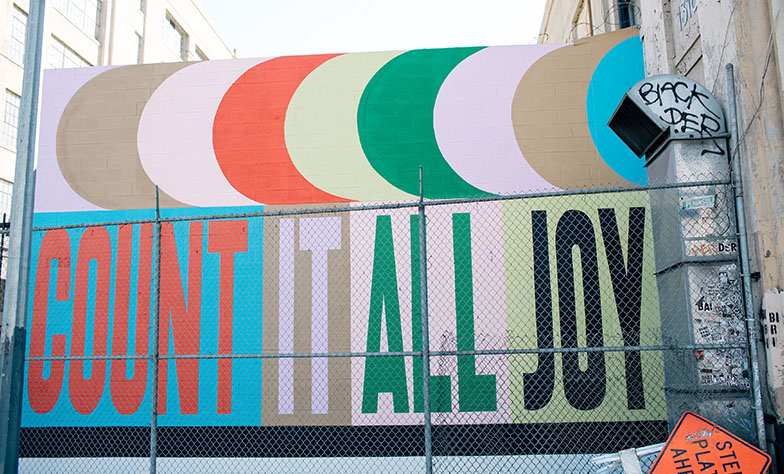 Today, Lakwena focuses on creating positive messages rendered in bold typography and kaleidoscopic colors. And while her themes of affirmation and empowerment are universal, she is keenly aware of both the opportunity and the social responsibility of public art. “I love the fact that anyone can see my paintings when they’re on the street. It’s not elitist,” says Lakwena.

Lakwena’s “Count It All Joy” mural can be found at the end of Market Row near the A+R Store. 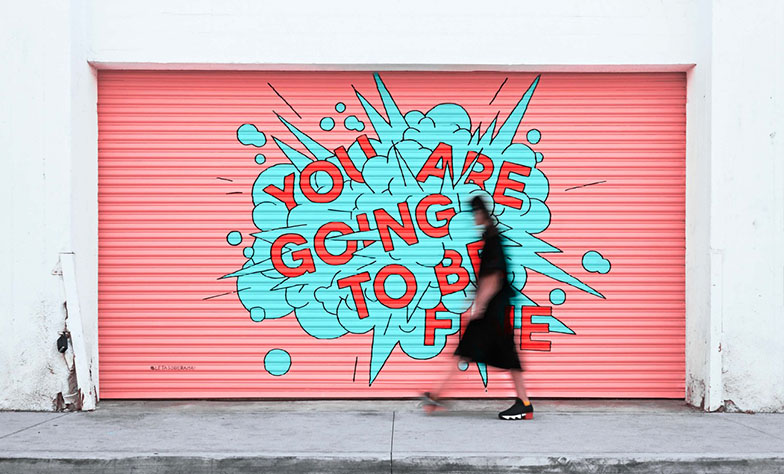 Leta Sobierajski is a self-described “detail orientated obsessive who seeks to inject color into everything she touches.” As one half of the Brooklyn-based creative studio Wade and Leta, Leta and her partner often take refuge in their shared creative universe, which she says is “rather colorful, and wonkily shaped.”

Her “You Are Going To Be Fine” mural is inspired by a simple phrase she often tells herself to ease her own anxiety. With this affirmative message, she hopes to encourage many small, private moments of comfort and reassurance, contributing to an overall safe and positive public environment.

Leta’s mural, “You Are Going To Be Fine” can be found at ROW on Market Row near Poketo. 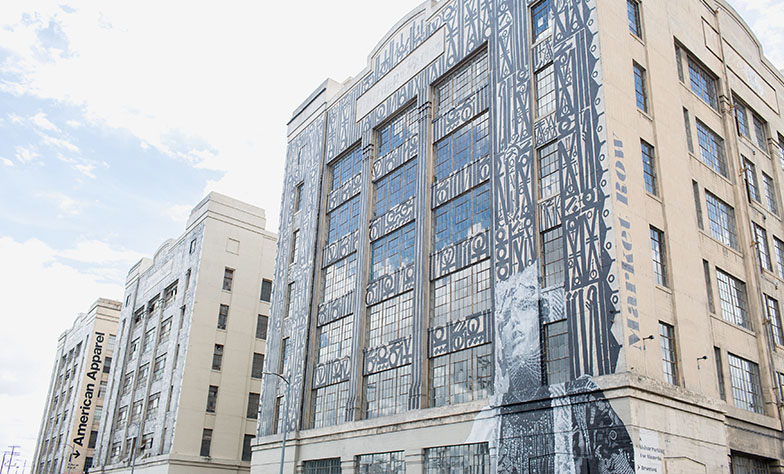 Los Angeles-based artist Marquis Duriel Lewis, better known as RETNA, painted the Southern Pacific Building in 2016, ushering in the first of ROW’s large-scale artist collaborations. In many ways, the historic building proved to be a fitting canvas for RETNA, who finds inspiration in civilizations of the past. 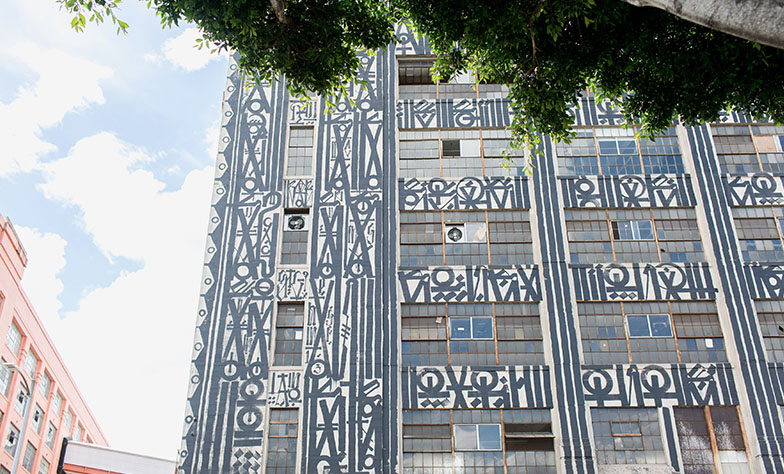 Specifically, RETNA has mastered his own geometric script, a stylistic alphabet that references the language of various cultures without belonging to any particular one. He shares, “I want my text to feel universal. I want people from different cultures to all find some similarity in it—whether they can read it or not.”

RETNA’s painting on the Southern Pacific Building can be viewed from 7th Street. 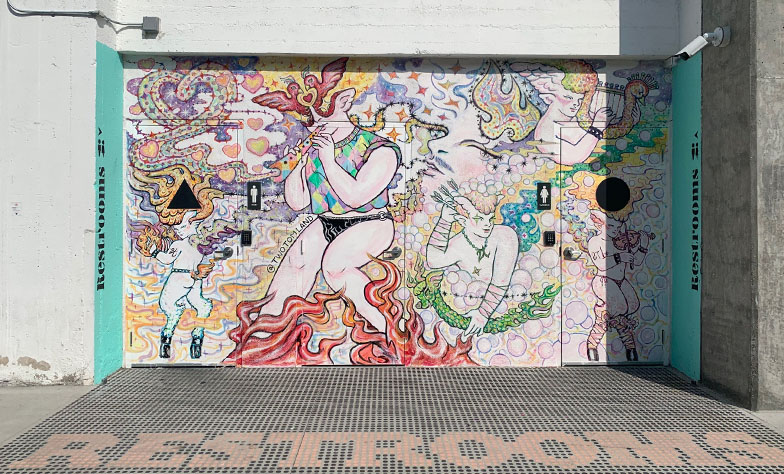 TWOTOM’s artwork can be found on Market Row. 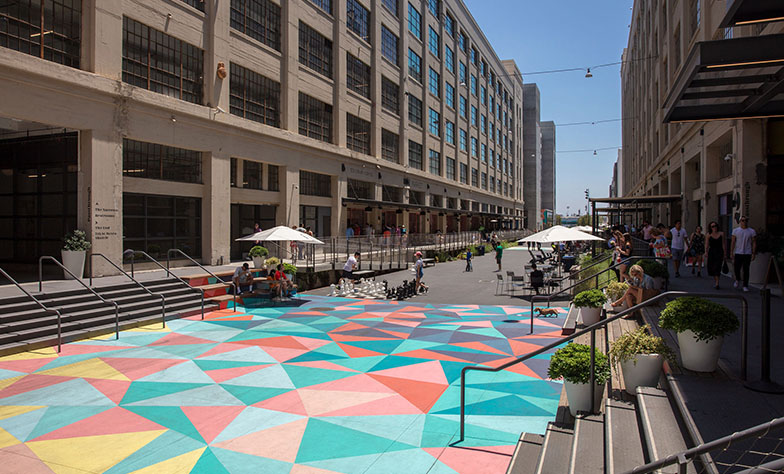 The moment you step into the heart of ROW, you find yourself beckoned onward by a large-scale array of brilliant geometric tiles. This work belongs to Long Island native Evelyn Leigh, who has been creating artwork across LA for the better part of the last decade, and who remains captivated by the city: “LA is a mecca for street art and I'm like a sponge in all it's sudsy glory,” she says. 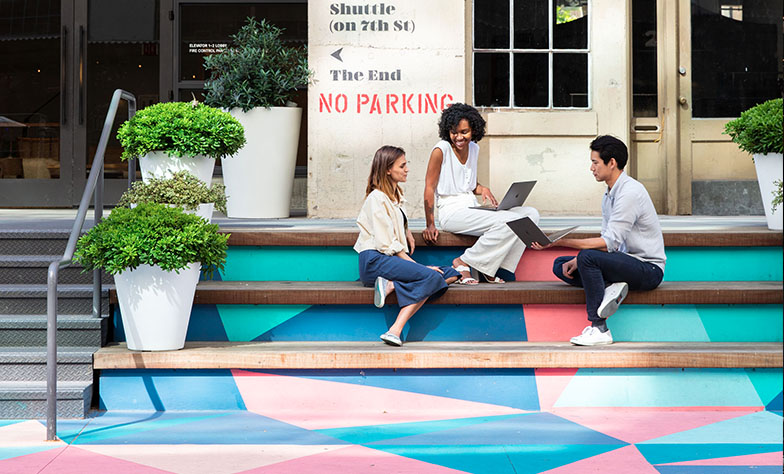 “There isn't a painted sign or mural that I don't absorb into my brainwaves.” Her beautification process is one of discovery, and she is endlessly inspired by the notion that the “next revolution of space can be uncovered with a few cans of paint.”

Evelyn Leigh’s work can be experienced from the central area of ROW. 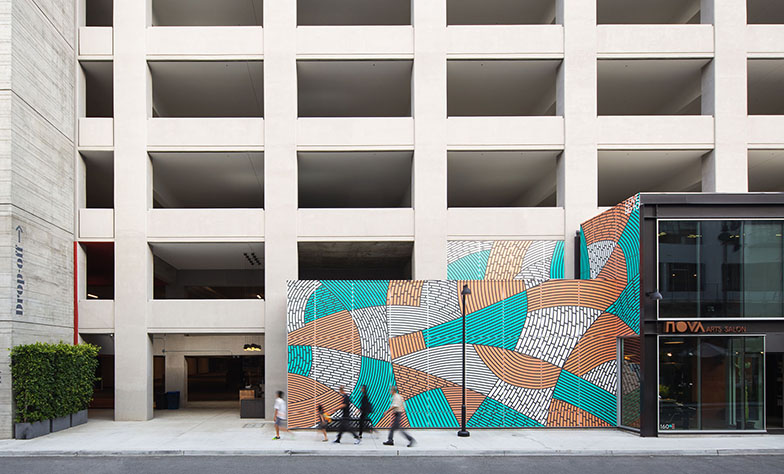 Miami-born artist Love Berto has traveled the world in search of art and waves, and now currently works out of his home studio in Ventura, California. His vibrant, multi-story murals are painted by hand in an exacting process, “resulting in monuments to color, frequency, and pattern influenced as much by Frank Stella and Keith Haring as by the surf in Dakar and the streets of Berlin.”

Love Berto’s murals at ROW can be seen at the entrance of the parking structure.